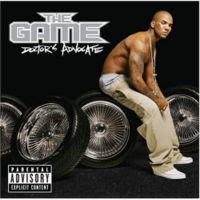 A review I wrote last October for The Game’s latest album. Hopefully, I’ll be able to write more this year.

The Game “The Doctor’s Advocate” 4/5 Narks

Since the Game’s freshman record, “The Documentary”, he’s had beef with 50 Cent, patched things up with 50 Cent, been ousted by 50 Cent from G-Unit, and finally moved from hip hop’s elite label, Aftermath Records, to Geffen Records, known for Nirvana and Nelly Furtado, but not much in the rap world. The Game, born Jayceon Taylor, is out to prove that he is left coast king, and doesn’t need 50 to replicate the triple platinum success.

In most cases, The Game proves he can carry his own torch and blaze a few new trails along the way. Incorporating most of the same production cast (Just Blaze, Kanye West, Scott Storch) as “The Documentary”, The Game welcomes a few new guests as well. Just Blaze helms the stellar “Why You Hate the Game?” (and “The Remedy”) as the Game and Nas go toe to toe with a choir-like backing. The experimentation to step outside the typical west coast bounce is a welcome one. Will.I.Am helps out on the most pulsating beat of the album on “Compton”, try not press rewind on this ode to Game’s home base, it won’t happen. The gem of the album has to be the heartfelt title track, “Doctor’s Advocate” featuring Busta Rhymes. Its basically a play-by-play/apology to Dr. Dre of the Game’s tumultuous/successful year. It is a slick premise and is hard to ignore. The Kanye West (another classic 16 bars) assisted criticism of video vixens, “Wouldn’t Get Far”, has an infectious chorus and could be a future single.

Conclusion, “The Doctor’s Advocate” probably won’t replicate the sales of “The Documentary”, but should cement The Game as one of best lyrically in commercial hip-hop. Though it lacks Dr. Dre’s watchful eye, it appears The Game has learned a thing or two from his mentor when it comes to making a good album.