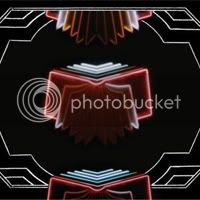 Though I haven’t heard their 1st album, the heavily lauded The Funeral, Arcade Fire’s latest album has been so highly anticipated I couldn’t ignore it. It has been featured on every blog, column and radio show imaginable. At first, I was a bit hesitant to check out Arcade Fire. I thought they would be a bit too dark for my taste, but that happens to be one of the band’s strong points. Albums that have this much to live up to usually don’t quite deliver the goods (see The Killers Sam’s Town and Clap Your Hands Say Yeah’s latest), but Neon Bible sets the tone for the rest of 2007.

Recorded throughout last year in an old church, Arcade Fire uses instruments like the piano, violin and organ to evoke a sermonly/orchestral feel. Neon Bible commands your attention from the start with the anthemic “Keep the Car Running”. With a fist-pumping chorus and instrumentation that could rival an ’80s The Cure song, it could easily move from indie to mainstream rock playlists. The album builds steam with a darker tone on songs like the haunting “Black Mirror” and “Oceans of Noise”. Lead singer Win Butler, uses a unique singing approach filled with wails and shouts that layer precisely within the creepy landscape.

The stand out cut has to be “Intervention” (one of the best performances in years on SNL). Paranoia filled lyrics such as “Been working for the Church while my family dies/Your little baby sister’s gonna lose her mind/Every spark of friendship and love will die without a home/Hear the soldier groan “We’ll go at it alone.. ‘” cover everything from war to religion. The menacing organ sounds straight out of a horror movie (its a good thing, trust me).

Lyrically, Arcade Fire has been criticized for not being overly articulate. I would agree, but it is only because they didn’t need more than basic language to get their point across. Tracks like “Windowsill” lure you in with shouts against capitalism that are self-explanatory (Don’t wanna live in my father’s house no more/Don’t want it faster, I don’t want it free) and don’t need words from an overused Thesaurus to tell the story. The main draw to Neon Bible is an encompassing, haunting sound and for that, Arcade Fire has created a masterpiece.