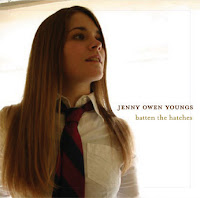 A new artist I found out about yesterday is folk/indie rocker Jenny Owen Youngs. I was referred to her by the amazing weekly podcast, Pop Candy. The podcast is written by USA Today blogger Whitney Matheson and covers everything in pop culture (“Lost”, “30 Rock”, concerts, movies, etc.) and she usually gives some good music recommendations as well. I was particularly impressed with Jenny Owen Youngs with her earnest approach and pop potential (and lets face it, I’ve been a sucker for a lot of singer-songwriter types lately).

Jenny Owen Youngs has some great songs (especially “Drinking Song” and “F*** Was I”) on her myspace page and I hope to hear more (“Voice On Tape” is very Rilo Kiley-esque = a good thing). The tracks seemed accessible and easy to relate to (especially for college-age listeners). Her latest album, “Batten the Hatches”, was re-released on April 10th. The album was previously self-released by Youngs in 2005 and seems to have stood the test of time.

Although I won’t be able to attend, she is the opener for the talented Vienna Teng tonight (4/25) at The Ark in Ann Arbor and I advise anyone in the area to check out both musicians. There are two shows listed (7 pm & 10 pm), but it isn’t clear if Youngs will be performing at both, but 7pm for sure.

Listen to Jenny Owen Youngs have a little fun with a classic from a few years ago. I don’t usually like rap/hip-hop covers, but this one is worth a listen…or seven (pardon the sound quality).