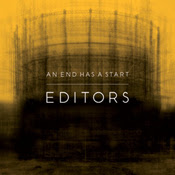 One of the U.K.’s finest rising bands, Editors, have returned with their highly anticipated album, An End Has A Start. As mentioned in a previous post, Editors are one of the first bands I stumbled upon when I was in search of new music last year. Its fair to say, they are one of the first bands I can say I’ve followed, which is great because I can see how they grow and evolve (Arctic Monkeys are a close second). After playing their platinum debut, The Back Room, countless times in the past year and catching them in concert last summer, I have been more than anxiously awaiting their next offering. This also makes it tougher for me to a) criticize their latest effort without bias and b) not be jaded to the fact that it might not be better than The Back Room, but I did my best.

After a first listen, it was apparent that the band has only got better at playing together. Whether it was by the guidance of recruited producer Jackknife Lee or touring the globe, their improved efforts have not been wasted. However, improving a craft does always translate into dramatic results. The new album treads much of the same ground as Editors’ debut, specifically the epic ballads that highlighted The Back Room: “Camera” and “All Sparks”. In a post on the band’s myspace page, they cite deaths and trials throughout last year fueled the morbid, yet truthful finished product. Fortunately, dark themes and art rock are one of the band’s strongest attributes.

The first single, “Smokers Outside the Hospital Door”, opens the album on a grandeur note in heart breaking fashion. This tale features lead singer Tom Smith wondering how his life got to this point, seemingly in ruins, simply asking, “Someone turn me around/Can I start this again?” The song climaxes with a choir chanting, “We’ve all been changed/From what we were/Our broken parts/Smashed off the floor” almost as an otherworldly being answering his calls for redemption. “Weight of the World” continues the trend with commentary about a person’s role in the world pondering, “Every little piece in your life/Will add up to one/Every little piece in your life/Will it mean something to someone?”.

One of the standout tracks on the album is “Bones”. The song is a heartfelt conversation about striving for a love that never quite matches the trouble. On the mid-tempo cut, the words “In the end all you can hope for/Is the love you felt to equal the pain you’ve gone through” speak to how relationships can be just as taxing on a person as physical injury. Further, “A system’s put in place/Put there to protect us/For you I throw a life line every time” is explains how a person’s skeletal structure is there to safeguard from pain and heal wounds. The parallel is made to the way a person can be hurt and but still be able to heal and forgive, even if they subconsciously know they will be hurt again.

Lighter fare can be found in the pulsing title track, “An End Has A Start”. It features a rapid guitar with some synth assistance and states “You came on your own,/And that’s how you’ll leave,/With hope in your hands,/And air to breathe.” A bit morbid, but a scenario for a variety of situations (birth and death or the rise and fall of a relationship). “Racing Rats” has up tempo energy and an industrial sound similar to “Fingers In The Factories”, and speaks about being caught up in the contemporary world unable to keep in touch with whats important. Enough that you might not even notice the apocalypse. Many of these tracks will only further the comparisons to Interpol and Coldplay, but is inevitable with those bands citing similar influences (U2 and Joy Division).

Though experimentation is usually lauded in this forum, there is something to be said for consistency. An End Has A Start may not cover a lot of new territory, but Editors should be admired for creating a solid follow-up to their debut. Fans familiar with the band should enjoy it and I expect a larger US following after the release on July 17th. They are truly championing their sound which I would describe as industrial, with a touch of grandeur.