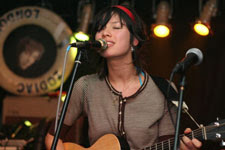 Emmy the Great is a young, British, singer-songwriter type that should be penetrating your eardrums soon, if she isn’t already. I first heard her on the popular site, My Old Kentucky Blog, and my interest was accelerated with a post about her on the Daily Growl. There really isn’t much more I can pontificate about Emmy the Great that those two gentlemen didn’t already say, but I would like to reinforce them.

Mostly, I can’t fathom why she hasn’t been scooped up by a label yet. She is precisely the reason I wish I could start my own record company. She would easily be the flagship artist. Her soft-spoken, troubadour approach is very accessible to a variety of audiences. Not to mention that her voice delicately laces each melody, but makes you listen (similar to Feist).

One of the Emmy’s greats so far, is “Two Steps Forward”. The run down of an encounter with a past love reminisces about how times have changed since the couples’ last rendezvous, including vivid imagery of the her first sexual encounter, religious opinions, and the fun of music before it was a “job”. Emmy’s airy vocals combined with the impassioned subject matter effectively give a sense of the innocence lost and the pain it has caused. The track is sure to conjure emotions and thoughts of nostalgia over the acoustic guitar strums and subtle fiddling. You hardly notice that there isn’t a chorus because you are enamored with every earnest detail.