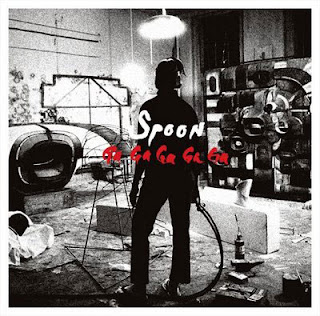 Anyone who has filed through any place for music news and reviews in the past few months has probably read some sort of praise for Spoon. Their latest album, Ga Ga Ga Ga Ga, has been lauded by many and even mentioned in some early discussion for album of the year. Unfortunately, it took me longer than usual to check it out. Partially due to the onslaught of new records released this season and honestly, I think I subconsciously avoided it because of all the hype.

It wasn’t until I finally got around to watching the highly underrated Will Ferrell film (also featuring the great talents of Emma Thompson and Dustin “I’ve been in every movie you can think of” Hoffman), Stranger Than Fiction, that my interest in Spoon peaked. I waded through the credits to find out who the band was that had me humming along throughout the movie. I was pleasantly surprised to find Spoon had 6 songs in the film and I was eager for more (I also decided I would love to be the person to create soundtracks for movies and TV shows).

Coincidentally, Ga Ga Ga Ga Ga had just been released and I didn’t need to be convinced, the album is great. It is classic indie rock for devout followers or pop music fans. Songs like “The Underdog” and “You’ve Got Yr Cherry Bomb” are breezy enough for an afternoon on the beach and catchy enough for a rowdy game of beer pong. The band’s Brian Wilson-like abilities for writing fetching hooks and layered sounds are both pleasant and addicting. Lyrically, its not exactly profound, but is more than sufficient as a fun, summer album.

If you are in the Detroit area on October 13th, check out Spoon at The Majestic Theater. Tickets are are $20 before Live Nation adds all of their garbage charges, but the band’s shows have been getting rave reviews as well.

The whole album is streaming here if you need to give it a trial run.