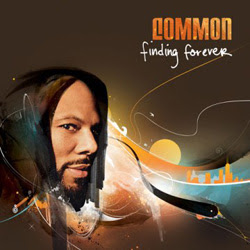 Common has blessed the masses once again with a great album. While most of the rap industry is focused on making a new dance, dropping a non-sense radio hit or selling the most ringtones, Common keeps hip-hop alive. Over and over, he has consistently dropped knowledge for backpackers, street scripture for hip-hop heads and enough eclecticism to grab mainstream listeners and Finding Forever furthers that notion. Continuing on the momentum of 2006’s hip-hop album of the year, Be (arguably, album of the year in any genre), Common, with the help of usual suspect Kanye West, has created songs full of rich narrative and unrivaled soul appeal.

People who don’t take time to listen hip-hop/”conscious rap” claim it doesn’t keep their attention. Fortunately, one of Common’s strongest qualities is the way he tells stories through song, which attributes to fans often pressing rewind. It is like listening to a spoken word poet who knows how to prophesies with rhythm. On “The Game”, Common tears through DJ Premier cuts and Kanye’s menacing production while speaking on the current status of the hip-hop culture. “Southside” stomps through with the hardest beat on the album. Common and fellow Chi-Town affiliate, Kanye West spit battle raps back and forth as if trying to one up each other with clever lines like: “Back in ‘94 they call me Chi-town’s Nas/Now them n***** know I’m one of Chi-town’s gods” and “Thinking back to the projects, and they way they tore ‘em all up/Like when I do a project, and come back and tear the mall up”.

Common trades some of the pop-tinged songs of Be for soul on Finding Forever. His deep voice has never sounded better intertwined with samples looped by way of producers Devo Springsteen and the late JDilla. D’Angelo sufficiently guests on “So Far To Go” where Common shows appreciation and lust for a lady for bettering herself. The peak of the album is the aptly titled, “Misunderstood”. Once again, Common weaves haunting tales of lost souls in the ghetto over the lush, Nina Simone sample. Its as if he has cast himself as the narrator as an AIDS-stricken young man and a young stripper wander through lives spiraling out of control.

Another standout track is the radio-friendly, “Drivin’ Me Wild”, surprisingly featuring Lily Allen. Although the song doesn’t make uses of Lily’s sly humor (though her voice is very recognizable), it does showcase Common’s storytelling ability at its finest. While he lyrically disects a female narcicist (“Had a body, A body that you can’t pay fo’/That mean she had some Ds on her but they wasn’t fake though”) and a playboy with too much money (“Spendin cash at the bar to get credit/Drinkin Chaundon just because BIG said it”), Lily uses breathy vocals to get the point across. The chorus, “It’s this thing now, that’s drivin’ me wild/I gotta see what’s up before it gets me down/No it’s not a mystery, it’s everything”, explains how meaningless obsessions can take over one’s life.

Finding Forever is another classic album by Common that should appeal to fans of all kinds. While it lacks some of the pop appeal of his last album, it fills the void with insightful, soul-filled tales backed by some of the year’s best production in hip-hop. Look for Finding Forever to rack up a number of accolades before the 2007 is over.