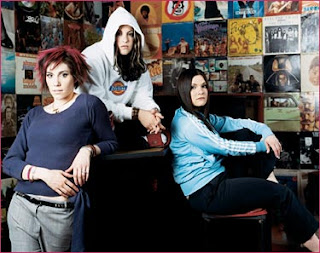 When I bought Tegan and Sara tickets, I was pumped because I thought Great Northern would be opening. Upon further research, I found that I was wrong, it would actually be Northern State (an unknown band to me) warming up the stage in November. Although I was disappointed at first, it didn’t take long before I realized this was a blessing in disguise.

Northern State are a trio of ladies who infuse their indie-rock talents with good enough rapping skills to make you press rewind (I guess it would be “left arrow” on i-pods). Hesta Prynn, Spero, & Sprout hail from New York and while I doubt you would ever see them on a Brooklyn corner with The Notorious B.I.G., their hip-hop flavored rhymes will bring a smile to your face. Their high strung, upbeat flow on “Sucka Mofo” might remind you of a female version of the Beastie Boys, and for good reason. After garnering buzz from their EP, “Dying In Stereo”, Adrock of the Beastie Boys offered to remix one of their tracks and ended up executive producing their latest album.

The girls’ most recent album, Can I Keep This Pen, dropped Tuesday and should not be ignored. Songs like “Better Already” and “Mother May I” are playful enough for casual rap listeners and experimental enough for indie fans alike. With support from Questlove, Pete Rock, and a Pop Candy podcast feature this week, the buzz should only continue.

Northern State – Mother May I