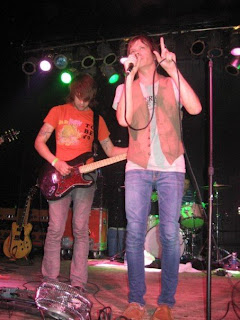 Since I have 4 concerts lined up this fall, I figured I would try writing a few concert reviews. One of the first indie bands I was introduced to, also happened to be the first band I saw in concert this year, The Format. The Format are a band from Arizona, who’s name refers to their variety in sound, as in, not following the norm. They have released 2 albums (most recently Dog Problems) and a number of EPs that range in style from indie pop to alternative. The were dropped from Atlantic Records, just before the release of Dog Problems, but have gained a huge following due to the band’s critical success and loyal fan base.

Last Friday, Laura and I were lucky enough to see The Format at St. Andrew’s Hall. The mood was upbeat and harmonious throughout the night and it showed in each of the bands’ performances. Members of the Format and the three opening bands frequently sat in on each others sets with ease and excitement.

Since this was an early show (a 5:00 start), we arrived a bit late and missed the first opening band, Reuben’s Accomplice. But gladly, we there just in time to take in the scenery before Limbeck took the stage and the sold out crowd began to filter in. I had never been to St. Andrew’s before, so I had been looking forward to visiting a new venue. The historic location emitted all of the nostalgic stories I had heard about with its dusty hardwood floor, elevated balcony, and mountainous speakers.

Limbeck was the only band I was able to check out before the concert and they aptly met my expectations. Their indie/alt country sound was very crowd friendly and kept the audience’s attention. “Big Drag” and “Honk and Wave” persuaded me to purchase their latest self-titled album. Limbeck was followed by a rousing set by New Jersey’s own, Steel Train. Lead singer, Jack Antonoff created a great show with a passionate display of on stage antics echoing the band’s classic rock influenced sound. Not to be outdone, Piebald‘s Travis Shettel had his own way for grabbing the audiences’ attention. As I was later told, this would be the band’s last stop in Detroit after deciding to amicably break up after the tour and the band played like it. Piebald’s entertaining set shot even more adrenaline into the crowd with piano driven indie rock, a crowd surfing attempt and parachuting toy soldiers from the highest speaker in the room.

When the Format reached the stage, it was clear who the Detroit fans were there to see. From the horn-flavored start on “Dog Problems”, to the bouncy rendition of “Snails”, the crowd served as back-up choir, echoing lead singer Nate Reuss’ every word. Though the band only slowed things down a bit on an acoustic session featuring the heartfelt “On Your Porch”, it was perfect for the intimate setting. Things quickly picked up with snappy renditions of “The Compromise” and the label-bashing “My First Single” before the raucous encore. The encore came with a run through of “I’m Actual” and “Inches and Falling” and following an invitation, members of all of the opening bands joined in for “Caravan”. Nearing the end of a long tour, you could clearly see the new found camaraderie of all the musicians as they grabbed any instrument available to end their Detroit stop on a high note. Concert #1 = Success. 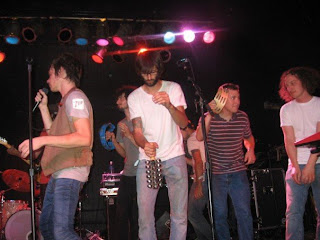 The Format – The First Single (Cause A Scene)

The Format – On Your Porch

The Format – Inches and Falling

*Thanks to a fellow fan who posted more pictures here (I’m too cheap to buy a digital camera).