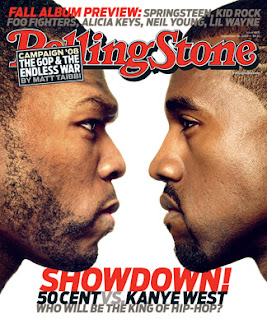 Everyone else has an opinion about it, why not me? Two rap superstars. 1 day. 1 winner. Kanye vs. 50 Cent. Graduation vs. Curtis. The hype surrounding the rap album showdown on Tuesday, September 11th is about to bubble over. Though my interest in today’s rap game is waning (can you blame me?), this feud caught my attention. Even my favorite indie rock journal, My Old Kentucky Blog, commented on it. If you have been living under a rock, here’s the run down:

50 Cent was set to release Before I Self Destruct earlier this summer. After releasing the lackluster, “Candy Shop” leftover, “Amusement Park” and street single “Straight to the Bank”, 50 decided to head back to the studio. After a hilarious feud with rapper Cam’ron, where Killa Cam tried to belittle 50 by calling him by his real first name, 50 changed the name of the album to Curtis. He recruited Akon, JT, Timbaland, Nicole Scherzinger and usual contributors Eminem and Dr. Dre to beef up his lukewarm reception. These changes pushed the album back to September 11th.

Meanwhile, Kanye West had been in the lab crafting his third disc, Graduation, hoping for an August release date. Just when the street single, “Can Tell Me Nothing” was gaining steam, Def Jam decided to delay the disc until September 11th. Even though Curtis was already scheduled to drop, he had the gall to say “I hope that they see and understand what’s getting ready to happen.”

What 50 didn’t know, was the fire-starter single Kanye had in his back pocket. The Daft Punk sampled single, “Stronger” generated enough buzz to burn G-Unit offices down, getting love from the indie set and mainstream fans. 50 came back with his own scorcher, “I Get Money”, but its success has paled in comparison to Kanye’s first. Even the release of the JT & Timbaland assisted “AYO Technology” hasn’t propelled 50 back to his lofty perch. The latest Billboard Hot 100 singles charts has “Stronger” at #2 and “AYO” at #20. “I Get Money” has made some noise in radio play, but it still can’t match Kanye’s heat. For those counting, 50 released 4 singles to Kanye’s 2. Just wait ’til Kanye drops “Good Life” with T-Pain…

The biggest headline of the story though, is 50’s claim that he will retire if Kanye sells more than him the first week. He claims that he won’t release any new solo material, but will appear on other artists’ records from the G-Unit camp. If that were true, he might as well start looking for a resting spot in Florida now, because Kanye’s presales are already beating him.

What do I think? I definitely think Graduation will sell more than Curtis, though they will both hit big numbers. 50 Cent had his time to shine and while his fan base used to be as wide as Eminem’s and Dr. Dre’s, his arrogance and rap’s overall sales decline will take a chunk out of his Soundscan numbers. Kanye West is very arrogant as well, but he still has the hunger to want to be #1 that 50 lost after “In the Club”. 50 Cent is a marketing genius, from books to Vitamin Water to clothing. I don’t even doubt the possibility that he could have met with Kanye earlier this summer and set this whole charade up. Other labels saw the opportunity and now Kenny Chesney will drop the same day. 50 just isn’t as musically innovative and lyrically gifted as Kanye to remain relevant. Kanye might call himself the Louis Vuitton Don, but when he gets respected from backpackers and hip-hop heads for his beats and rhyme skills.