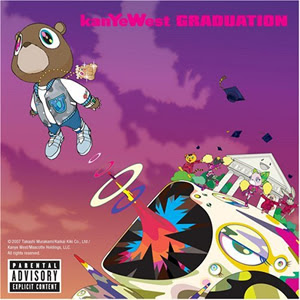 With the massive anticipation for Kanye West‘s third opus, Graduation, many people wondered if he could rise to the top of the class. In the past 2 years, since Late Registration, Kanye has injected his larger than life persona into popular culture by a public displeasure with George Bush, unleashed tirades at various award shows, successfully launched his G.O.O.D. Music label with the help of John Legend and Common, and engaged in a sales competition with 50 Cent. Needless to say, these events gave Kanye plenty of material to create a colorful and inventive new album.

Kanye West continues his flavor of digging in the crates for classic samples on Graduation, but this time he infuses his penchant for soul with a futuristic/new wave sound. T-Pain assists with his trademark vocal distortion over a sample from Michael Jackson’s “P.Y.T.” and synthesizers on the party driven next single, “Good Life”. “Stronger” may not be the first time a hip-hop producer has sampled Daft Punk (see Busta Rhymes‘ “Touch It” helmed by Swizz Beatz), but it certainly is the best. The futuristic drum beat reverberates through the speakers while Kanye confidently rhymes his way in to space.

While most of West’s best raps are boastful, bravado filled with fashion-sense and pop references (see “The Glory”), he usually includes a few tracks that give a more personal look at the inner demons of Kanye West. “Everything I Am” shines as a laid back piano sampled track featuring turntable work courtesy of DJ Premier. He addresses naysayers who chastise his actions and simply states “everything i’m not, made me everything i am”. “Big Brother” gives a personal account of West’s rise in the Roc-a-Fella crew and his admiration for idol/label head Jay-Z. From being too star struck to speak with ‘Hova to trying to match Jay-Z’s success and being humbled by Def Jam’s president at Madison Square Garden, it shows West’s vulnerable side.

While West earns many A’s on Graduation, there are still a few spots where you can see he has a few more things to learn from the “Best Rapper Alive”. “Drunk and Hot Girls” follows late night exploits of the rich and famous with promiscuous ladies with a lazy, annoying flow. “Barry Bonds” would suffice as a mixtape cut (Lil’ Wayne continues his streak of hit guest appearances), but seems out of place with the sonic-soul feel of the album.

Kanye West has quickly risen to the top of the hip-hop A-list with spit fire rhymes paired with innovative production. Graduation continues the tradition with West’s earnest, unapologetic approach and catchy, but soulful beats.

Kanye West – Everything I Am