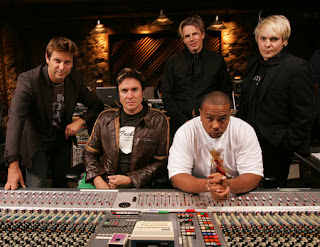 Duran Duran wanted to make more than a comeback after threatening to fall into the abyss of fallen rock stars, they wanted to take over the pop charts. The band hoped to return to their new wave roots that made them staples on MTV in the ’80s with hits like “Hungry Like The Wolf” and “Rio”. So, they went out and hired two of the biggest names in music, Justin Timberlake and Timbaland (not to mention, protege Nate “Danja” Hills). Lead singer Simon le Bon confessed, Timbaland “was the only producer out there that we knew we all liked” and the collaboration turned into “Red Carpet Massacre”.

Duran Duran‘s 12th album, Red Carpet Massacre, should be a sure-fire hit, when it is released on November 12th. Anticipation has already begun building from leaks of three tracks featuring Timbaland and JT’s genii behind the boards. Will their seemingly midas touch give Duran Duran the success its already given Timbaland and JT’s solo albums and other collaborations (Bjork, 50 Cent, Nelly Furtado, etc)?

If the early results are any indications, then the answer is a resounding yes. The first single, “Falling Down”, is a mid-tempo ballad reminscent of tracks from “Future Sex/Love Sound”. Listeners that didn’t even see the ’80s will easily relate to the reflective cut. The pace quickens on “Nite Runner”. Timbaland quips ad-libs, while JT backs le Bon on the sexually charged hook with sublte cow-bell hits and beat boxing. “Skin Divers” delves further into new wave inspired territory with futuristic keyboard synth and irresistibly odd chorus (“It’s a skin dive/In deep silence we are/Going underwater/It’s a lifeline/Teardrop, bullets, all night/Dip into the water”). Timbaland shines with a funky few bars (“Babygirl you’re swimming/A little too deep/So deep….that I think you might hit a reef”) and trademark turntable-like vocals (think Aaliyah’s “Try Again”).

Though its more of a testament to the hit-making machine that is Timbaland and Justin Timberlake, Duran Duran show they can still convincingly make good pop songs. Simon le Bon told Rolling Stone earlier this month “We want Top Forty”, Thats exactly what they will do.