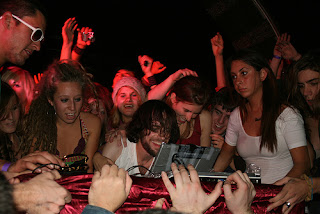 Pandemonium. Mayhem. Insanity. These are the best words I could think of that described the scene I witnessed in Pontiac on Saturday night, and they don’t even come close. Girl Talk came to Eagle Theater this weekend and nearly incited a riot with a frenzy of mash-ups that shook the venue. And it was amazing.

Girl Talk aka Greg Gillis, has quickly garnered a cult following among bloggers, hipsters and music fans everywhere with his knack for creating hits out of hits. An engineer by day, entertainer by night, Mr. Gillis soon realized making people dance to mixtures of Dr. Dre & Billy Squier was his true calling. The Night Ripper, gained so much attention that Girl Talk earned sets on the major festival circuit (check out these videos from Coachella and the Montreal Jazz Festival) over the past 2 years. Though I hate the term mash-up, its the only phrase I have heard that best portrays his work. It just doesn’t give justice to the expertise Gillis has for the precise beat-making heard on Saturday.

With a line that stretched around the corner of Saginaw St in Pontiac, the anticipation was building for the sold out show. You could sense the feeling that my fellow concert goers weren’t sure what to expect. The Eagle Theater’s unique decor, was certainly perfect for a unique event. From the ballroom type ceiling fixtures, to the disco influenced platforms, the venue was a mash-up of eras past, collaborating for the sold out event. The opening band, Death Set, didn’t show up (according to Girl Talk, the band rocked too hard the night before), but people didn’t seem to mind, giving a short chant for the headliner to arrive.

After a brief introduction by Girl Talk, the festivities were ready to commence. Gillis’ bare bones approach, dressed in a white track suit and headwrap with a card table and wireless laptop, gave the feeling that he was only here for one reason, to make everyone party. From the first note of the opening song (a revamped edition of “Hold Up”), the crowd was in a frenzy and it only took a few seconds before the entire stage was filled with rowdy dancers. It wasn’t long before the aforementioned table helmed by Girl Talk was engulfed in a sea of sweating bodies. While some of my group ventured to the madhouse on stage, the floor was equally electric. Jumping, dancing, and bouncing off people from every angle was the only way to move and not a soul gave a care or sharp elbow. I don’t think I’ve ever seen that many people in one confined area smiling and dancing.

With the non-stop party in full swing, it was hard to take note of the exact sources of the many new creations blasting from the towering speakers. Which is really just a testament as to how amazing the whole event was. Aside from a smattering of tweaked tracks from The Night Ripper (including the classic Elton John/Notorious B.I.G. collabo, “Smash Your Head”), there was a mini Daft Punk tribute, a memorable rendition of Soulja Boy’s “Crank That” with Jay-Z’s “Big Pimpin” and countless new gems that will hopefully surface on a future album. After almost two hours of a non-stop dance party, everyone in Eagle Theater looked like they had left the best rain shower they had ever been in. Sign me up for Round 2.

I didn’t have a camera, so thanks to whoever’s pictures I borrowed… 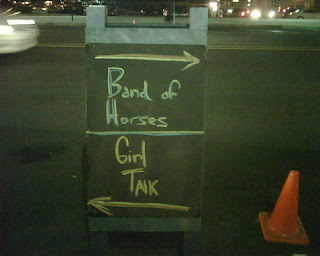 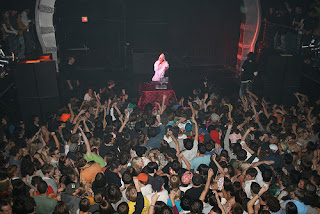 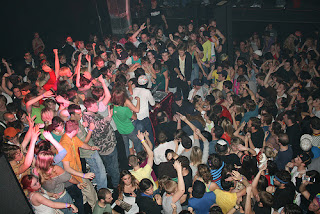 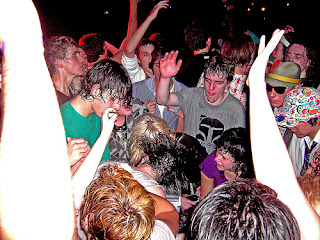