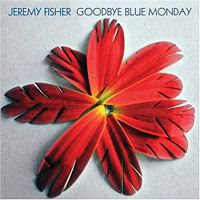 Jeremy Fisher is singer-songwriter from Vancouver, Canada. With the release of his sophomore album, Goodbye Blue Monday, he sure to draw many comparisons, but it shouldn’t hold him down. With story-telling skills in the mold of Bob Dylan and Paul Simon combined with a scratchy, likable voice similar to Josh Rouse, success shouldn’t be hard to find.

“Scar That Never Heals” is sure to rise to the top of hipster playlists with its up beat, playful “Cecilia”-like flavor. With hand claps a plenty and a ’70s folk pop backing, its hard not to nod your head. Though I don’t understand the hook (“she runs guns everyone wants guns/She runs guns everyone wants there she goes”), my best guess is that his lover’s disdain for monogamy, is the cause for Fisher’s melancholy, pain.

Apparently, Fisher paid attention in English 101 as he perfects personification on “Cigarette”. The single features Fisher’s Paul Simon-like, story-telling skills as he continuously offers himself to a female who keeps coming back. He lazily croons, “I’ll be your cigarette/Light me up and get on with it/I’ll be hard to forget/Good or bad I’m just a habit.”

Goodbye Blue Monday is filled with upbeat bounds of indie/folk rock. Other highlights including “Jolene”, the Americana filled “Remind Me”, and the bouncy track “Sula” are sure to cure any Winter blues. Any similarities Jeremy Fisher attains to the aforementioned greats should be welcomed as a hint of Fisher’s bright future.