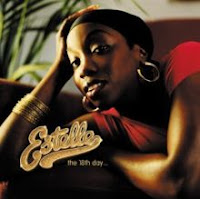 Newcomer songstress/rapper Estelle is preparing her sophomore album, Shine, to be released this February. After gaining mild success in her native home in London, Ms. Swaray is hoping her hybrid style will breakthrough across the Atlantic. Estelle’s debut, The 18th Letter, quickly garnered the attention of then-unknown singer by the name of John Legend. When it came time to get started on her next effort, Estelle wanted Legend to executive produce, but he wanted more. Legend signed her as his first artist on Homeschool Records. Shine is scheduled to feature production from Swizz Beatz, Cee-Lo, Wyclef Jean, and current “it” producer, Mark Ronson.

I am very intrigued to hear more from Estelle. Her lead single, “Wait A Minute (Just A Touch”, has generated some heat early with the help of Will.I.Am. Next up is an appearance by Kanye West on the hip-hop flavored “American Boy”. I am most interested to see if Mark Ronson can duplicate his success in 2007 with Sharon Jones and Amy Winehouse. While Estelle is more hip-hop than those two singers, Ronson has shown he can make his throwback sound work with artists from many genres (see Lily Allen, Rhymefest, ODB). Carrying a soulful voice mixed with a jazzy flow and A-List backing, Estelle should have no problem glowing in 2008.

*Songs were removed by request of record company : (