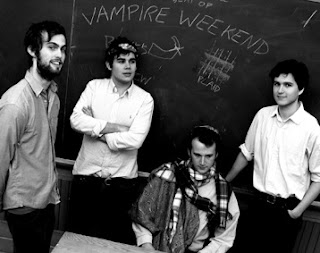 I was late to jump on the Vampire Weekend bandwagon, mostly due to the incessant onslaught of blurbs I read. But believe the hype. They have been labeled as a “blog band” and received some backlash after reaching the mainstream, but Vampire Weekend makes great indie pop.

Their self titled, debut album was released last week, after much delay and emits a sound that infuses African(“Cape Cod Kwassa Kwassa”), Punk (“A-Punk”), and Classical music (“M79”). Most of their fare isn’t especially lyrically ground breaking, but is more than intricate when crafting a brilliant musical landscape. How can you not love a band that manages to slip in a Lil’ Jon lyric without sounding ridiculous?

Vampire Weekend will be at the Blind Pig in Ann Arbor tonight.