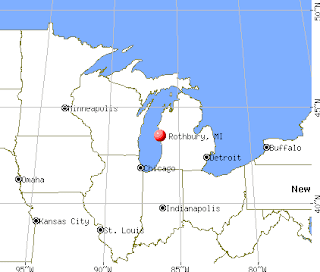 While I was going through my daily routine of scouring music sites for the latest news, I was not very shocked to see another 3-day music festival scheduled for this summer. From Woodstock to South By Southwest, fans have paid their savings ($100-$500) to check out mile-long lists of “it” bands on a long weekend. While Lollapalooza has been the only way for Mid-westerners to join in the fun, without having to drive 8 hours or more, I never thought there would be a festival closer than Chicago.

So imagine my surprise when I ran across an article on Billboard.com stating Rothbury, MI would be hosting “Rothbury – A Sustainable Camping Festival Celebrating Music and Art”. What?!?!?! I was sure this was actually a misprint for the rumored Vineland Music Festival supposedly happening in New Jersey, in August, but wrongo bongo my friend. Rothbury Festival will most definitely be taking place about 3 1/2 hours Northwest of Detroit on the coast of Lake Michigan.

So far, the lineup looks like this: Dave Matthews Band, John Mayer, 311, Snoop Dogg, Modest Mouse, The Black Keys, Citizen Cope, Ray Lamontagne, Drive-By Truckers, Of Montreal, Gomez, Diplo, and more. I can’t say I would be too excited to pay $250 to see that list, but if this year was a success, can you imagine what this could turn into? This wouldn’t be too bad, would it? Or how about this?

On another note, Rothbury brands itself as “a music festival revolution”. It might also be a hippie’s dream with a very cool, “green initiative”. Hoping to minimize the damage past Woodstock and other gatherings have caused the environment, Rothbury wants to create a “zero-waste” event. Their mission is “committed to harnessing the spirit of the music festival community into a durable social movement.” To make this happen, there are volunteer opportunities, such as “Work Exchange – Green Team” where concert goers volunteer for 5 hour shifts during the show, where they will be reimbursed for their concert ticket. Of course, you have to purchase a ticket at regular price as a “deposit”, but not a bad way to give back and listen to great live music at the same time.

While I think I am still going to hold out hope that I’ll have the funds and an opportunity to hit Lollapalooza this year, I am ecstatic at the idea of a major music fest in Michigan. It wasn’t very long ago when Ms. Waters and I were hoping we could start a festival of our own (never say never). If Rothbury succeeds this summer, it could be the next Coachella? Early bird tickets go on sale February 27th.

The Black Keys – Your Touch