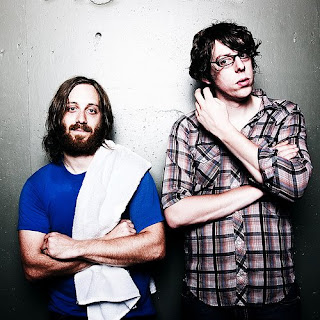 I haven’t had time to mention The Black Keys‘ latest effort, Attack & Release, in the past month. Thats because its been a non-stop fixture in my cd player.

**Warning-Short Rant Below**
Yes, I actually went to buy this album because sometimes, I just miss the physical process of purchasing new music. In fact, I would probably switch to vinyl if it were possible to transfer the music to my computer, eventually. But there is something to be said for:
A)driving to a record store (unfortunately, I don’t know any in my area)
B)paying cash
C)tearing off the plastic
D)checking for a scratch-free disc
E)perusing through liner notes
F)listening to a new album from start to finish
iTunes just can’t give me that experience (and my wallet can’t handle buying 10 albums a week).

Anyways, on Attack and Release, the Black Keys added a third party to their close knit duo, producer Danger Mouse. While many were nervous that Danger would disrupt the chemistry and success Dan Auerbach and Patrick Carney had on past releases (I know Magic Potion, but need to check out the rest), fans shouldn’t worry. If anything, he helped refine their garage-blues sound and only added when necessary. On the lead single, “Strange Times”, Carney’s drums sound as hard as ever and Auerbach’s vocals have a commanding presence. Danger subtly sprinkles some psychedelic keyboarding and an eerie backing to complete the apocalyptic track. “Psychotic Girl” continues the dark tone with a creepy organ amid his haunting voice. Listeners are easily entranced by slight strumming of a banjo, as Auerbach tries to ward off the advances of a female who isn’t who she seems.

If a little Danger Mouse, is too much for you, not to worry. “I Got Mine” showcases the duo at their best with thunderous chords with a Led Zeppelin feel. Other highlights include “Oceans and Streams” (a metaphorical bout with insomnia) and the mid-tempo cut “So He Won’t Break” (maddening heartbreak).

Look for The Black Keys to continue to gain momentum with stops at Lollapalooza, Rothbury and their own tour this summer.

The Black Keys – I Got Mine