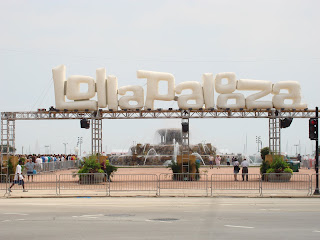 Disclaimer: What I’m about to post is as accurate (and long-winded) as I can be about my experience at Lollapalooza 2008. For each day I’ll post photo albums here and you can check out videos here. It doesn’t really do justice to what a great event and how sweet the whole atmosphere actually was. Hopefully you will understand why I was grinning from ear to ear all weekend.

DAY 1
After a successful (and on-time) Amtrak train ride from Birmingham, MI to Union Station Thursday night, I could barely sleep in anticipation of Day 1 at Lollapalooza. When I woke up Friday, it was easy to let my sleepiness subside. I was on my own that morning, so after perfect directions from Ms. Waters, I made my journey from the Fullerton stop to Grant Park. After exiting the downtown “el” stop, I followed an obvious group of festival-goers who were trying to decide between early sets by Butch Walker and Rogue Wave.

I happily entered the heavenly gates to the right of a giant, inflated Lollapalooza sign just after 11:30. I didn’t need to be at the Myspace Stage for Rogue Wave until 1:15, so I grabbed a free program and wandered the park. I was immediately taken aback by the size of Grant Park (later wouldn’t be so roomy). I made it a point to survey all of the stages I had drooled over the past few weeks, take in the unique ideas (Green Street, shaded Hammocks, branded tents, Food Town), Buckingham Fountain and looked for a decent Lolla shirt (no luck).

When I reached the North end of the festival, I stumbled upon the early energy of reggae/hip hop artist, K’Naan at the Playstation 3 stage. He reminded me of K-OS and I quickly took note to check him out more when I got home. Immediately after he finished, Black Lips took over at the Bud Light main stage with their garage punk sound. They didn’t exactly keep my attention, so I headed 15 minutes south to get a good spot to view Rogue Wave. Zach & company moved higher on my list of favorite bands with catchy indie songs past (“Publish My Love”), present (“Like I Needed”) and Chicago-themed (“Lake Michigan”). I headed back to the Bud Light stage wondering why they were scheduled so early, when they much more worthy of a late afternoon slot. The Go! Team brought a lot of enthusiasm with their indie anthems, but were plagued by early sound troubles and lead singer, Ninja, was mostly drown out by the rest of the band.

The back and forth was only beginning as I hoofed south again, this time for Yeasayer‘s show at the AT&T main stage. The experimental and Middle-Eastern sounds were felt most on “2080” and the appropriate “Wait For The Summer”. Next up was Duffy, back at PS3. I took in most of her set from a distance, but her Motown-influenced sound seemed a bit out of place. I met up with the rest of my party just before Akron, OH duo the Black Keys took the mainstage at nearly the hottest part of the day. So hot, that the crowd cheered for a large cloud that slowly moved in the Chicag sky. Their Southern blues rock was just what the 2nd largest crowd I saw Friday was looking for. Guitarist & singer Dan Auerbach repeatedly praised co-hort Patrick Carney for looking possessed while booming on the drum kit, especially on “Strange Times”, “10 AM” and “Your Touch”. The Black Keys closing their 3rd straight Lolla appearnce with a thunderous rendition of “I Got Mine” to great fanfare.

We opted to skip Cat Power and made our way back to the south end of the park, stopping at Perry’s Tent to see DJ Million $ Mano. The organizers did their best to turn the shady, cool spot into a club-like atmosphere with couches and DJ’s aplenty. I only saw a special appearance by Drea of He Say She Say for “Crash Dummie” and heard Mano spin “Lady”, but it was enough to check out Mano out next time I’m in town. We caught married duo, Mates of State, (with 2 extra members on strings and horns) halfway through their set. My sweat level was reaching maximum levels but MOS’s set was more than enjoyable as they performed “The Re-Arranger” and “Goods” and clearly had fun doing it.

The next two hours were a whirlwind that started with hearing a familiar Grizzly Bear song while inhaling a $5 cheeseburger from Food Town. Bloc Party played a solid set, but Kele and company belted out all of my favorites (“Hunting For Witches”, “Banquet”) early so we opted for a water break. The crowds had thickened to the point that the “75,000 people” number I heard earlier, became more realistic as we bounced back across to see the Raconteurs. We only stayed for a few songs, but got the point: the band is great a playing nostalgic, garage rock. I pretended that the Cool Kids weren’t playing, in favor of catching the 2nd half of CSS‘s set. I’m sure the Cool Kids were great, but CSS was a great choice. Not only did they play all the songs I needed to hear (“Off the Hook”, “Music Is My..”) they actually got the Citi stage rowdy. Lead singer Lovefoxxx started in a red body suit with a ring of flowers wrapped around it, only to disrobe to another ridiculous outfit. She jumped roped with the mic cord, was flanked by a hilarious dancer in florescent spandex and made everyone, including a mohawked rocker scream “Alala”. Mission accomplished. One of the best performances of the weekend.

Radiohead closed out Day 1 as the only headliner and filled the entire south end of the park. I stuck around for a half hour or so, but just didn’t get into them. Everyone raved about their performance, so I’m sure it was great. I was glad I was able to see that ocean of people that clearly loved them. After exiting the park, I took a quick train ride back to the apt., showered and went out with the rest of the Ann St. ladies before I had a chance to think about sleeping.