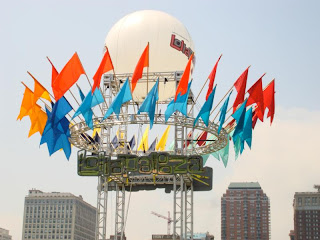 DAY 2
After an amazing, but exhausting Day 1 at Lollapalooza 2008, I was looking forward to Day 2’s less cluttered lineup. Jenny, Andrea, and I were able to make it to Lolla-land midway through Margot and the Nuclear So & Sos’ set around 12:30. We heard the only song we knew (“Skeleton Key”) and many others (“Quiet as a Mouse” and “Bar Fight Revolution”) that made us realize they were worth looking into further. As the early sun and heat began to filter into our pores, Jenny concluded that I must not have an “off button” since I went out and about Lincoln Park Friday night and was still standing.

Next on the AT&T stage was indie-pop duo, The Ting Tings. Their music sounds like it would be hard to reproduce outside the studio, so I was very interested how it would translate live. Lead singer Katie White was commanding on guitar and Jules De Martino kept the speakers pounding on the drums. It was easily one of the most memorable performances of the weekend with “Great DJ”, “Fruit Machine” and extended versions of “Thats Not My Name” and “Shut Up and Let Me Go”. With an additional drum by White, it might have also been one of the louder performances of the day. The next two hours were pretty chill catching lunch, stages in the shade and the temperature a tad less humid. We saw a relaxed set by folkie Mason Jennings, a dizzying performance by Steel Train, and a lackadaisical hour from MGMT (but a huge crowd). Instrumental outfit, Explosions in the Sky floored the Bud Light stage with a numbing, guitar-heavy performance. I looked into their music before the festival, but you really need to see them live to view the passion and emotion they put into their work.

After breezing by Okkervil River, we opted to get a good spot for Lupe Fiasco‘s main stage offering. I had to pretend Jamie Lidell wasn’t playing across the field, but the wait for Lupe was worth it. He back flipped on stage to the “Rocky” theme, doing one-armed push-ups, and was backed by a full band and DJ (not to mention the deaf interpreter who kept up with Lupe, wow). Dapper dressed in all-white, he almost looked like a preacher and echoed this getting the crowd into “Kick Push” and a gospel intro to “Daydream”. Lupe ran through hits from The Cool and saved an extended version of “Superstar” for last. Lupe has clearly picked up some showmanship from Kanye the past few years and had the crowd amped and ready for Rage.

Lupe filled the south end of Grant Park, but by 8:30 it was clear who Lolla-goers were there to see, Rage Against the Machine. Unless they had been to a few festivals last year, there is good chance fans hadn’t seen the band since 2000. Flanked by an blazing red star, Zach de la Rocha and company erupted with “Testify”. Fans eager to get closer to the stage immediately pushed forward and mosh pits sprouted left and right. After a chorus of cheers, “Bulls On Parade” fueled the fury and the atmosphere was electric as fans bounced in unison to Tom Morello’s guitar genius. Unfortunately, this is the moment fun energy almost turned to riot mentality. After “People of the Sun”, Zach paused to urge the crowd to “take care of one another” and move “5 to 10 steps” back so hurt fans near the front barricades could exit the area. Rage played an amazing, energetic set, and sounded as tight as their records, but had to stop two more times to make fans realized the seriousness of their actions. We would later find out that Rage fans without tickets had been jumping fences and plowing through security to join the mayhem. Our bubble below the left Show vision screen wasn’t nearly as crazy as others, but after a fan was sucker punched by a meat head, for no reason during “Guerrilla Radio”, we decided to catch the last few songs by Wilco.

We peeked in Perry’s tent to see DJ Momjeans aka Danny Masterson (Hyde from “That ’70’s Show” on our way to the Bud Light stage. Highlights included a “Fedora” convention on stage and Masterson giving the crowd the finger to a chorus of cheers. Wilco proved to be the polar opposite of Rage. The north lawn was scattered with people much older than Rage’s demo relaxing on blankets to Jeff Tweddy’s scratchy, alt/folk rock. We stood nearly the same distance as we did for Rage and didn’t bump into a single person while the band closed with “Walken” and “Outtasite”.

Day 2 was just as solid as Day 1. While we didn’t see as many bands, we were closer for most, didn’t get cooked by the sun and saw some of great performances. Lupe and Rage Against the Machine had the most influential performances of the day, in my mind, but the Ting Tings and Explosions in the Sky were stunning as well. We took a longer “el” ride and quickly passed out ready for the 3rd and final day of Lollapalooza with the rest of the the Ann St. ladies.