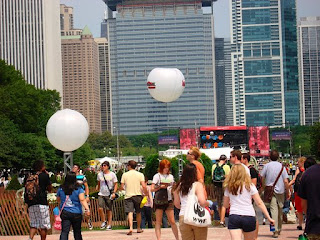 DAY 3
After a rowdy Day 2 of Lollapalooza, Day 3 seemed to come as soon as my head hit the pillow. I was more than ready for Sunday though and the ladies of Ann St (Laura, Erin & Becky) were pumped to join the Waters duo and I.

Laura, Becky and I departed early for Grant Park to catch Chicago’s Office at 11:30 at the PS3 Stage. I’m pretty sure they were both surprised by the size of the park as we made our first of many jaunts across the north end. After 30 minutes of what seemed to be an excruciating sound check, we were informed that the Weakerthans couldn’t make the fest, so Office’s show was bumped to the afternoon.

We had some time to relax, so we leisurely made our way south to the AT&T stage where female rapper Kid Sister was to perform. It was still early in the day so we were able to stand close for a good view of the show. Rage Against the Machine was the last show of Day 2 on the stage and sunglasses, pieces of shoes and dead grass were the only remnants left. Kid Sister appreciatively came out with a hype-man, back-up dancers and DJ AutoBot (Flosstradamous) on the ones and twos. Koko B. Ware hasn’t come out yet, but had the crowd engaged with fun, new, dance rap (“Switchboard”, “Control”) and performed her biggest hit, “Pro Nails”.

We met up with the rest of our crew at the sparsely filled Citi Stage for What Made Milwaukee Famous. They were serviceable, but didn’t exactly wow the crowd until “Sultan” and a few closing songs. I did find out that they aren’t from Milwaukee and didn’t live up to all the Spoon comparisons I had heard though.

With our full group in tact we took a lunch break in the shade and headed for the Myspace stage. I had finally succumbed to the incessant promotion of Chromeo and was looking forward to them after copping Fancy Footwork a few weeks earlier. Dave 1 and P-Thugg were on their electrofunk A-game from the start keeping the crowd nodding (“Call Me Up”) and dancing (“Tenderoni”) in the sweltering humidity. I’m sure its nerve-wracking performing in front of thousands of people, but the Montreal based duo were one of the few acts that interacted with Lolla-goers all weekend. Aside from making the crowd bounce with “Call Me Up” and “Bonafied Lovin'”, Dave and P were like a comedy duo with jokes incorporating P’s talk box.

Florida’s Black Kids set on the Citi stage overlapped with Chromeo, but I was able to hear a few of the hits from Partie Traumatic while the ladies took a break from the heat. Lead singer Reggie Youngblood’s faux British accent got the best response on “I’m Not Gonna Teach Your Boyfriend How to Dance With You”. They sounded great live and probably could have played on one of the bigger stages.

We opted for shade and beer rather than G. Love and sweat from 4:30 to 5. After cooling off, we traveled north again to the PS3 stage (hearing Iron & Wine in the distance) to see Irish/punk band Flogging Molly. They had one of the largest crowds I saw at that stage all weekend and did their best to turn it into a rowdy pub. Irish flags were in the air and Dave King snarled and shouted his way through a fun set filled with banjos, accordion, and fiddles. We left after “Float”, but “Requiem for a Dying Song” and other jams made me interested for more.

The toughest decision was at hand: Gnarls Barkley or Girl Talk. That resolution was much easier when we saw the crowd lined up at the Citi stage. The schedulers probably didn’t anticipate it, but Girl Talk could have easily filled Myspace or PS3 stages. As the bass line for “Charity Case” played at the AT&T stage, it looked like fans were stretched back to Food Town, cutting off walkways. Gillis finally took the stage at 6:30 and made his presence known with VIPs swarming his lap top and fake cops with toilet paper guns as the intro began. The dance party was non-stop as he ran through mash-ups and samples old (Biggie/Elton, “Play Your Part”) and new (Yael Naim/Khia, Daft Punk/Tag Team). It was so hectic that Gillis had to clear the stage because it was starting to bend. Nothin’ like a daytime dance party. The grand finale was nothing short of epic. Birdman & Lil’ Wayne’s “Poppin’ Bottles” played into Journey’s “Faithfully” and looped as Girl Talk crowd surfed from the stage to the sound tent in a friggin’ inflatable row boat. ‘Nuff said.

Everyone pretty much used all of their energy at Girl Talk, so after that we retreated to tailgate-like lines for the port-o-potties. Mark Ronson and company sounded great on the Myspace stage. His throwback sound with covers (Coldplay, Radiohead, Justice) and special guests Candie Payne, Rhymefest and Kenna amassed a large crowd as well. Unfortunately, Ronson mentioned this is the last stop on their long tour (which obviously skipped Michigan).

Our group refilled on beverages and food while staking out a spot on the hill for Kanye West. I was pretty disappointed in not lining up close to the stage for the final headliner of the weekend, but I got over it after a few songs. Kanye was backed by an elaborate stage complete with bright lights, a DJ, and energetic band. After teasing the crowd with a slice of “Stronger”, West greeted his hometown with “Good Morning”. He ran through all the hits from “Through the Wire” to “Diamonds” to “Can’t Tell Me Nothin'”. After a 15 minute long, Chi-Town flavored edition of his guest spot on Jeezy’s “Put On”, West stated “Now we can start the show”. For all of the names Kanye has earned over the years (arrogant, cocky, obnoxious), you have to give him credit for put passion into what he does. He shined throughout the his time on the main stage and was easily one of the best rap/hip-hop artists I’ve ever seen. Kanye showed his recent love for vocal distortion T-Pain style as he finished the last hour with rousing editions of “Homecoming”, “Good Life”, “Gold Digger” and more. Things got a little uncomfortable when West gave a short ode to his mother before “Hey Mama”, but closed in grand fashion. He let his band get some due recognition by surprisingly covering Journey’s “Don’t Stop Believin” and played “Stronger”, asking “is this what you’ve been waiting for?”. Indeed.

And just like that Lollapalooza 2008 was done. An ocean of festival-goers poured out of Grant Park and cheered in the downtown Chicago streets. It was amazing seeing my iPod come to life and experiencing that many live acts in one weekend. Its hard to single out who was my favorite artist all weekend, but Kanye, Girl Talk, Mates of State, CSS, Lupe Fiasco, Chromeo and Rage Against the Machine certainly were most memorable. The bad news is that Lollapalooza was pretty much a “gateway” event that is going to make me want to go to see most of these artists at smaller venues and make Lolla (or some festival) an annual necessity.