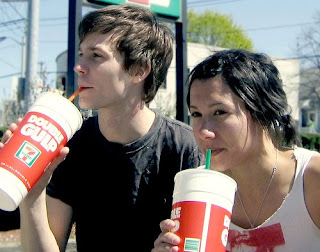 Brooklyn’s own Matt and Kim caught my eye and ear last fall, when I saw a video of them performing an acoustic version of “Yeah Yeah” on You Tube. Their bare bones approach, with Matt on an outdated keyboard and Kim drumming on a cardboard box accompanied by a bell, and what looks like Tupperware, blew me away. They are known for Matt’s bad, but good vocals, basic melodies and simplified hooks (see “Yeah Yeah” and “Its A Fact”), but you don’t need to be complicated to make good indie pop. I immediately snatched up their self-titled debut and the remixes that followed. For some reason, their accessible approach to music makes it that much easier to remix.

Matt and Kim’s next album, Grand, can’t come soon enough. Their simplicity is backed by the usual bouncy synth on their newest single, “Good Ol’ Fashion Nightmare”, but Kim’s big band drums steal the show. The track is their most jolly and well-rounded to date, and proves you don’t always need Auto-Tune if you sing off-key. Besides, they look like their having a blast doing it.