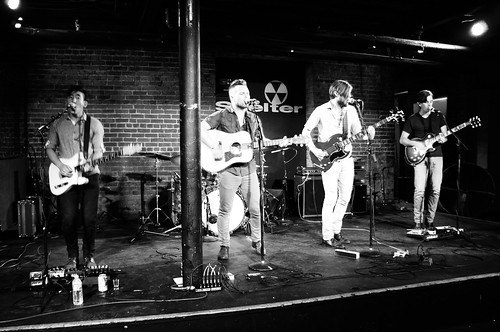 The hook from one of the many hits from Ivan & Alyosha‘s breakthrough album All The Times We Had (Amazon) repeats “you’re really easy to love” and the same could be said for the Seattle quintet’s first visit to Detroit. The gentleman of I&A were originally formed as a duo by lead singer Tim King and guitarist Ryan Carbary, but sounded extremely succinct as a fivesome. The anthemic qualities of album favorites like “Easy To Love” and “On My Way” felt even fuller with harmonies floating in the intimate setting of The Shelter.

Throughout the night, Tim and Pete King showed off chemistry only brothers can exude. The self-described “gospel from the suburbs” on acoustic jam “Glorify” featured animated efforts by Tim King, while Tim Kim had fans enthralled with reverb heavy strings on various cuts. Kim’s technique in utilizing a shot glass as a guitar pick impressively put a slide guitar effect on harmony-filled tracks. “Be Your Man” seemed like a sure-fire hit with its stomp inducing chorus and Tim King’s powerful vocals. The band’s biggest tune “Running For Cover” was an apt show closer as openers Neulore came out for an all out jam session. Though the venue wasn’t as packed as I’d hoped, I fully expect a fervent following the next time Ivan & Alyosha roll through Detroit.

As Tim mentioned last night, Ivan & Alyosha had an entire trailer’s worth of gear stolen at their Atlanta stop. They guys rallied and were able to power through the tour, but are still missing the trailer. The band has set up a fundraiser at Pledge Music where you can donate money and get great rewards like a cover song of your choice or VIP concert experience depending on your donation level. All The Times We Had is also for sale at NoiseTrade, where any purchase would greatly help the band’s cause.

Stream a view tracks below and catch Ivan & Alyosha on tour throughout the summer.
Easy To Love