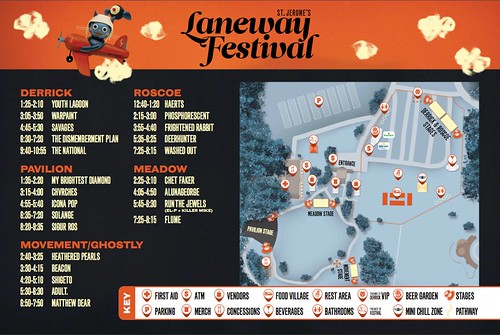 Going to Laneway Fest on Saturday? Great. If not, you need to be. This week I’ll share a few posts of why you should be attending the first ever US edition of St. Jerome’s Laneway Festival.

First of all, what is a laneway? Essentially, us Americans would just call them alleys. However, in Melbourne, Australia, some genius folks decide these alleys should “live” and turned them into bustling examples of urban land use. They aren’t just shadowy, forgotten spaces between buildings. Laneways connect the city with shopping, bars, restaurants, markets and more. As a future urban planner, I was drooling when I saw this video.

What does this have to do with a music festival? Well, Laneway Fest organizers Jerome Borazio and Danny Roger started the fest in 2004 by convincing Aussie act The Avalanches that they could “close the lane, remove the bins and throw a proper laneway party.” Bands were gathered and 1,400 people started what turned into one of the flagship festivals in Australia and landed in the US in Metro Detroit (of all places).

I’m not going to get into the entire “why Detroit?” conversation, but Consequence of Sound interviewed Rogers and got an excellent lesson in “why Detroit”. What I will say is that for about $92 (tickets) and some planning, you can see a helluva a kick off to what will hopefully be an exciting annual music fest in Metro Detroit. Recent Laneways have featured big names (Feist, Cut Copy, The xx), but have focused more on quality than quantity. You’ll rarely see the big, nostalgic headliners of the Lollapalooza’s or Bonnaroo’s. Instead, you get modest ticket prices and acts that you might not typically see. The first U.S. edition chose many overseas acts that wouldn’t normally stop through Detroit (Savages, Flume, Frightened Rabbit) mixed with critical darlings (The National and Sigur Ros), a dash of Movement-friendly acts (Shigeto, Matthew Dear) and buzzy acts like Icona Pop, Run The Jewels and Chvrches. Safe to say most people didn’t expect such a quality line-up on the fest’s first outing in Detroit.

The thought of seeing The National, Flume, AlunaGeorge, Killer Mike, Sigur Rus and more would easily cost more than $92, but as with every festival, a bit of strategy is necessary. The map for Sat.’s event features 5 stages, with 3 tucked away and 2 (Derrick/Roscoe) lined up side by side. HAERTS is a great choice to kick off your day at 12:40, but will you choose Youth Lagoon at the next stage  or travel to the Pavillion for My Brightest Diamond? Warpaint or CHVRCHES around 3:00? The Dismemberment Plan or or ADULT or Beyonce’s talented sister Solange at 6:30?  Tough choices are abound.

Stream the Detroit Laneway Festival playlist on Spotify and let me know your schedule in the comments.