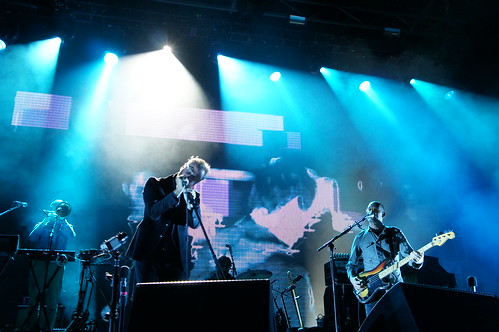 Metro Detroit and the state of Michigan have benefited from a growth in music festival options in 2013. From newcomers like Metallica’s Orion Music + More and Mo Pop Festival to mainstays like Movement and Electric Forest, Michigan music fans have had many weekends and line-ups to chose from. Perhaps the most intriguing name attached to all of them is Laneway. Already an established brand in Australia (and spreading to New Zealand and Singapore), Laneway brought an eclectic mix of live acts ranging from indie rock and pop to dance music.

Fans who made the journey to Meadow Brook Music Festival grounds were probably not surprised by the caliber of performances. After all, with blog favorites like AlunaGeorge and CHVRCHES, critical darlings like The National and Sigur Ros, and a ticket costing around $90, who would complain? However, the thin crowds were a likely welcome fortune for those who do not prefer sweaty, claustrophobic atmospheres of larger festivals. Five stages for 24 acts may sounds daunting, but the close proximity, absence of many conflicts and small stages made it easy to drift from one great act to the next. If you only wanted to see part of Frightened Rabbit’s set one of the top tier stages, no problem. Feel free to grab some delicious mac & cheese from Union Woodshop before you effortlessly glide to the front of the Pavillion and catch Icona Pop belt out “I Love It”. While future editions of Laneway Music Festival may not be so intimate, expectations will be high after many highlights from the inaugural event.

Laneway organizers made a wise choice in selecting Metro Detroit as their first U.S. destination. While attendance may have been lower than they may have hoped, the positive experience by many fans will hopefully bring greater rewards in future years. 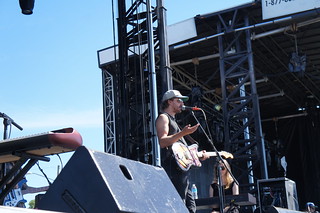 Phosphorescent frontman Matthew Houck happily strummed away with a full band in the early afternoon sun. Folk rock/alt country cuts from Muchado were on full display as Houck’s warbly vocals carried throughout the grounds on hits like “Ride On/Right On” and “Songs For Zula”. Matt Berninger from the National took in the set from a tent on the side stage, so fans knew they were in the right spot. 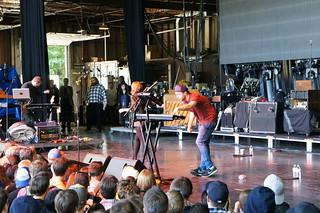 Scottish trio CHVRCHES (pronounced churches) were plagued by sound issues on Lauren Mayberry’s mic early, but the fiery trio powered through a high energy set of synth pop. Mayberry lightly bounced around the stage for spirited renditions of blog favorites like “Recover” and “The Mother We Share“, while Martin Doherty jolted on keys and sampler. Teases of other cuts from the band’s soon to be released debut The Bones of What You Believe meshed well as revelers filled the Pavilion stage. 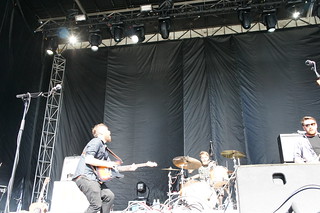 While performing “Swim” lead singer Scott Hutchinson admitted they’d had a long tour in support of their latest album Pedestrian Verse. That didn’t stop Frightened Rabbit from engaging the crowd in some call and response singing and shouting with what sounded like an endless amount of rock anthems. Every track sounded more emotional than the next with Hutchinson’s Scottish accent flourishing on cuts like “The Woodpile”, “Holy” and “The Loneliness and the Scream”. Sibling Grant furthered that sentiment pounding on the drums with wild animal-like expressions. 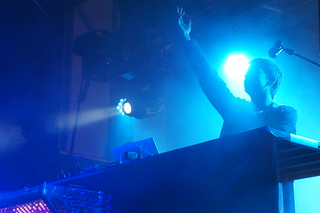 Unless you caught Run the Jewels (Killer Mike and El P are a match made in heaven btw) or trekked to the Movement/Ghostly stage, you probably didn’t hear much hip-hop or true dance music. Aussie producer Flume stepped up the energy at Laneway with a mixture blasting synth and chest-swelling bass on tracks from his debut Flume. Along with a healthy dose of remixes, fans seemed well aware of the buzzing act from Sydney’s penchant for moody grooves. The evening sunset initially hindered the glowing diamond and lights on the Meadow stage, but transitioned into a bright display that matched the sounds of Flume. 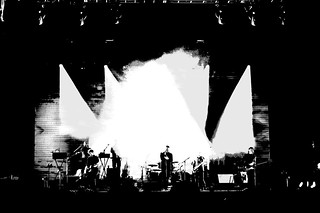 Many in the sea of revelers taking in Sigur Ros at the Pavillion appeared to have had The National in their Laneway plan. The Derrick stage was the thickest of the cool, Fall evening as fans took in a passionate, anthem-filled set by The National. Lead singer Matt Berninger’s energetic baritone vocals glowed nearly as much as the bright LED screen at his back. The set leaned heavily on the band’s recent triumph, Trouble Will Find Me and attendees seemed ready. Front row die-hards screamed the lyrics to opening performances of “I Should Live In Salt” and “Don’t Swallow The Cap”, while crystal clear images echoed the themes and graphically animated the full band. Berninger playfully engaged the crowd in between swigs of what appeared to be a red wine bottle. He gave nods to Detroit including featuring MI-native and My Brightest Diamond singer Shara Worden on “This Is The Last Time”. Later, Berninger gave humorous details about the band’s early visit to PJ’s Lager House and referenced Slow’s BBQ owner (then PJ’s employee) Phil Cooley. Classics like “Bloodbuzz Ohio” and “Afraid Of Everyone” sounded crisper than ever, but the apex of the evening occurred when Matt briskly weaved through the crowd shouting the hook to “Mr. November”. That electric moment put an explosive cap on a successful first ever Laneway in Metro Detroit. The National aptly closed with crowd favorite “Terrible Love”, while pure adrenaline had many fans in the crowd singing along.