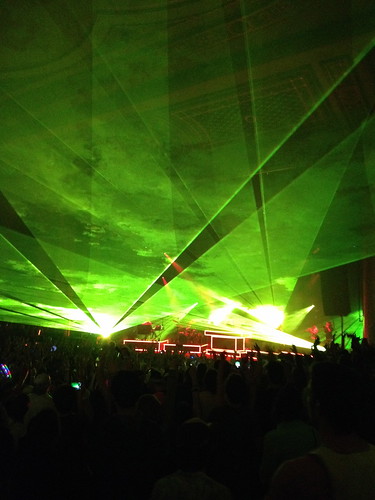 Having only witnessed part of a Pretty Lights performance at a Hangout Music Fest after party, I knew I had to see more. While I’m sure there was much more going on behind the blinding glow of the stage, Derek Smith seemed to glide from deck to deck with an entire tent full of revelers at his command. Considering my group snuck into said after show, I needed to be sure the fun had wasn’t just part of the thrill of a free dance party.

Fast forward two and a half years later and Pretty Lights’ latest album A Color Map Of The Sun (free DL) has been my go to album for studying and general quality listening. When I heard Smith would be taking a live band on tour and making a stop at Detroit’s famed (and recently rescued) Masonic Temple, I knew I had to go.

The Masonic Temple Theatre was already overflowing with a sea of bodies young and old when I arrived around 10pm. The nostalgic venue reminded me of the Fox Theater with a little more dirt and grime, probably from GRiZ’s most recent hometown show. No doubt, I wasn’t the only one who took a moment to stroll through the hallowed halls, stairwells and seemingly endless deep wood doors in the complex. Fans draped in ironic basketball jerseys, ’60s-inspired dresses and PL flat brimmed caps stumbled roamed various levels making one last pit stop for drinks and a restroom visit.

Pretty Lights and his five touring band members hit the stage near 10:15pm and paced through at least two and a half hours of sounds ranging from soul and hip-hop to dub and dance. As you’d expect, the light coordinator could have been the sixth member of the crew. Each beam that circulated the room was intentional and an emotive instrument in its own right. The tracks appeared to cover most of PL’s catalog with a steady pulse of movement and euphoria depending on the concert-goer. Despite the brisk Nov. night, it was easy to understand the sparse clothing choices, as fans left and right sweat through PL’s blistering bass and smooth transitions. Percussion and synth punctuated nearly every song performed, but the trumpet and trombone section truly amplified every arrangement they joined. “Yellow Bird” felt especially poignant with the brass paired with Smith’s deftly mixing into what sounded like an interpolation of MGMT’s “Electric Feel”. It is nearly impossible to keep track of each selection played (samples ranged from Etta James to Busta Rhymes), but with the free flow and extended jam session feel of the set, revelers could groove to the sound of their choice. Pretty Lights’ constant adoration for Detroit throughout the set gave the notion he was feeling as free as the rest of the crowd.

Color Of My Soul album