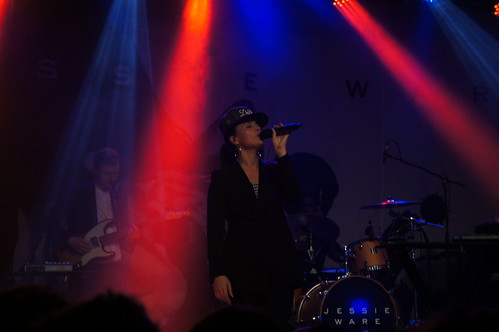 U.K. songstress Jessie Ware gave an expert lesson in enchanting vocals and crowd interaction on Friday night at Saint Andrew’s Hall. With only one album’s worth of material available, Ware made the most of an engaging set and showed future promise on her first Detroit appearance.

Tracks from Devotion like “Night Light” and “Swan Song” sparkled with Ware’s charm and vocal prowess, while benefiting from her three-piece backing band. The title track felt exceedingly soulful with Ware hitting deeper notes before rising with the midtempo cut “110%/ If You’re Never Going To Move”. Fans slyly two-stepped and nodded as Ware made use of a sampler emitting a distorted sample from Big Pun. Ware didn’t perform her massively enjoyable collaboration with Disclosure “Confess To Me”, but she did get the room moving to her Julio Bashmore-produced dance cut “Imagine It Was Us”. Her memorable cover of Bobby Caldwell’s “What You Won’t Do For Love” was also particularly well received by the Motown crowd.

Comical interactions made for a one of a kind experience as Ware showed off her sass and wit. Hilarious moments included a fan who appeared to be dancing a little too seductively for Ware’s taste, the ironic “it’s my birthday” shouter and Ware’s regret for not stopping by Hitsville. Ware’s earnest approach made the starlet feel more like an old acquaintance returning home than a UK mega star on her first trip to Detroit.

Ware brought out her best friend and co-writer of her debut album, Dave Okumu to help close out the evening with vocals and guitar. His subtle, but deep touch was particularly potent on Ware’s biggest hits yet, “Wildest Moments” and “Running”. Both instances highlighted just how honed and spectacular Ware’s voice erupts in a live setting. Where many singers just sing, Ware truly earned fans’ respect in a city with a history of legendary singers. When Jessie Ware returns to Detroit to capitalize on her new successes, she can proudly wear the Detroit hat a reveler threw on stage during the finale.

What You Won’t Do For Love (cover)

Imagine It Was Us